Dancing the Night Away: Spartan Sparklers 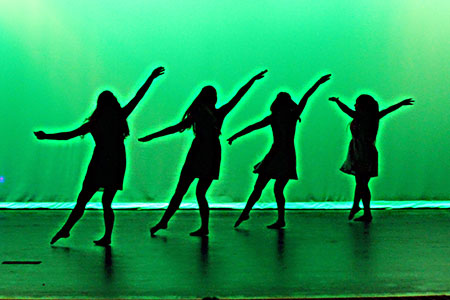 On April 10, 2015 the Spartan Sparklers held their 2nd annual Spring Show for the end of the 2014-2015 dance season. There was one dance that had a great message about bullying called Stand Up-Speak Out. The dance number started with Haley Hatton walking across stage with her books. She kept trying to say “hello” but was constantly ignored. Hannah Morse, acting as a popular girl, was the main bully. Throughout the dance, spectators began to figure out that there was one girl that was helpful and gave hope to the girls getting bullied. The song is about keeping your head up and not letting anybody bring you down, and the dancers expressed themselves well through their facial expressions and their motions. At the end of the dance number, the dance coach, Danyale Williams, came out and said that bullying is a difficult topic, but nearly everyone has experienced or witnessed some sort of bullying, especially cyberbullying. The team felt like they wanted to give the audience a strong message, and with this dance and theme, they certainly did.

The dance, Faculty Fun, made the crowd laugh, as it was i�?lled with teachers doing crazy dances, picking each other up and dei�?nitely i�?lled with fun. It started with a group of three teachers in a line and the middle one did a i��ip, of course with the help of the two outside teachers. Mrs.Klenke was doing cartwheels across the stage and in the middle, Mr.Timmons had Ms.Cathey on his shoulders. The whole beginning of that dance had the audience hooked. In the middle of the dance, the teachers could be seen making goofy faces and having a blast while dancing, which is what the faculty dance is all about, and to make the crowd laugh!

Overall, the Spartan Sparkler’s 2nd annual Spring Show was a success; the crowd laughed many times, and the dancers had smiles on their faces throughout all of the dances. There was a wide variety of things to watch in all the dances like the stunts. All of the proceeds are going towards the Spartan Sparklers, and the first items they plan on getting are new uniforms. Due to the fundraising and the overall success of the show, the recital was a perfect way to end their second season.