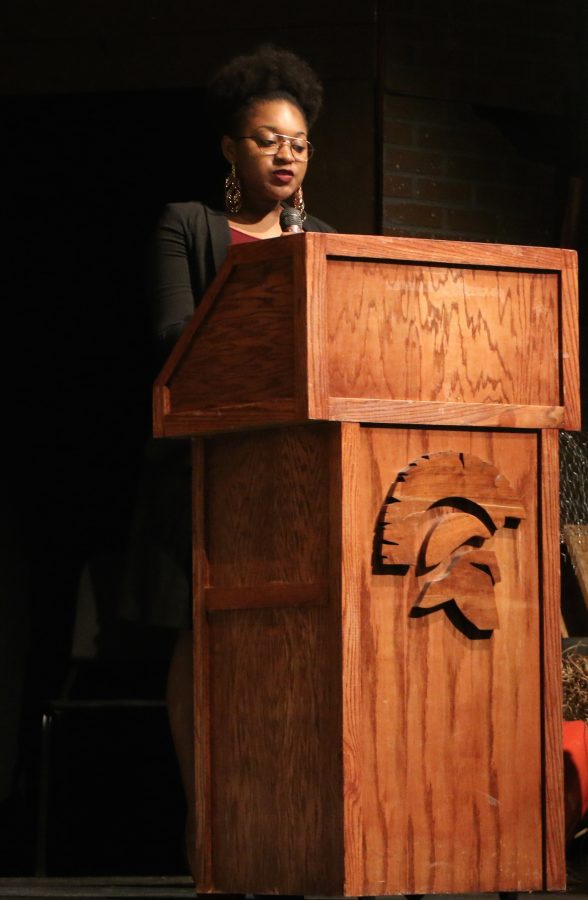 On Friday, February 5, Battle High School embarked upon a legendary first. As a kick off for Black History Month students put together an assembly to celebrate Dr. Muriel Battle, the school’s namesake. Fourth block teachers took their students to the cultural celebration assembly in the Performance Art Center.

Keondre Harrison and Hirron Milo handed out programs to each attendee at the doors. The assembly was titled, “We’re So Glad You’re Here”. The Performing Arts Center was packed with many special guests from outside of Battle in attendance.

The celebration ceremony started with the Advanced Acting class performing an original poem titled “We’re Glad You’re Here”. The poem addressed the racism present in our community today and spoke on the black community surviving, thriving, and overcoming this. Seniors Leslie Woods and Montiera Ferrell- Nelson were the Masters of Ceremonies and gave listeners a brief introduction before each performance.

Woods then introduced Julie Middleton, who was personally knew Dr. Battle and was mentored by her. Middleton gave an informative and touching speech about Dr. Battle’s long history in Columbia and Boone County as a bridge builder.

Middleton recounted a story about Dr. Battle’s always wise and helpful advice throughout her personal and professional life, reminding us to “Never forget the gift and power of a mentor.”

After Middleton left the stage Battle’s Jazz Band then performed “Motown Swing,” which highlighted prominent black jazz musicians, as well as the excellent music students Battle cultivates. The projection screen rolled down after the Jazz Band took their much deserved applause.

A short movie clip showed the history of segregation in the United States, specifically in Columbia, Missouri. The Little Rock Nine and Brown v. Board of Education filled the airwaves at the same time Columbia area schools were being changed by educators such as Muriel Williams Battle.

Dr. Battle worked in education and truly believed in the power of learning, she once said, “Education was the great equalizer for African Americans to get ahead.”

After Woods thanked both Middleton and the creators of the film, she welcomed Muriel Jean Battle-Browder, Dr. Muriel Battle’s daughter, to the stage.

Battle-Browder began her speech by recognizing and appreciating Battle’s unique culture and excellence. She said, “this school is everything that would make my mother’s buttons pop.”

She told students that after a quick search of schools named after women in the United States, she came up almost empty handed, with the exception of an Amelia Earhart and a Susan B.

Anthony High School. She then elaborated on how Battle was unique because it is named a woman, and a woman who was not nationally famous.

Battle-Browder then commented on a special gift that many students received upon entering the PAC, a puzzle piece. Her mother loved completing puzzles, and the pieces given to students were in remembrance of the great woman that Battle shares its name with. Battle-Browder also donated a puzzle to Battle High School in hopes that it would be a community puzzle; something that the school could solve together.

Ferrell-Nelson, one of the MCs for the night, thanked Battle-Browder for her kind words and introduced the Spartan Sparklers to the stage. The team performed an interpretive dance to “Glory,” a song written by John Legend and Common for the critically-acclaimed movie Selma.

The ceremony closed and of Battle’s choirs joined together to sing Psalms 23. Guests and students began to exit, yet the choir sang on, much like the celebration of Black History that continues on in the hearts of Battle’s students.