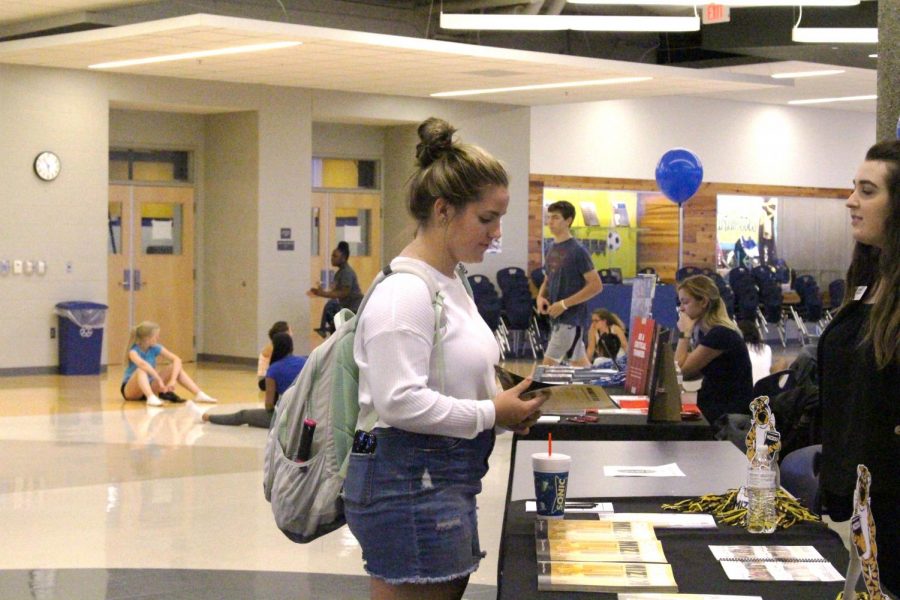 Emma McCormick speaks to the admissions rep from The University of Missouri.

Students filled the commons for the second annual College Fair. Over 30 institutions–  public, private, and technical– attended the college fair to talk to students about college.

Stephen’s College admission representative Carrie McKee stresses the importance of attending a college fair. “College fairs help students become more informed about their options after high school,” McKee said. “It allows students to get one-on-one conversations with their potential admissions reps and to learn more about the process of admissions for that specific school.”

Students who attended the fair received a bag to place any pamphlets they received about colleges and got to participate in a raffle to win college apparel of their choice. Spartan Alliance also provided cookies and drinks for attendees.  The raffle included a wide range of college apparel including t-shirts, mugs, umbrellas and more.

Despite, the incentives which attracted many students to come to the fair, one student, in particular, came for a different reason. “I think it was important because the biggest thing I needed to do was find out more information about financial aid,” Emma McCormick, junior, said.

While college is expensive, Stephen’s College admission rep Carrie McKee encouraged students to attend college despite hindrances that may come with it. “College can be affordable and that’s why we, as admissions representatives, are here to talk to students about ways they can earn scholarships,” McKee said.

Another hindrance for many students who are interested in college are the requirements to get in. Many students focus on academics and practicing for the standardized test. “I took the ACT; however, I’m going to continue taking it so I can raise my score. I’ve also been working with my teachers to maintain a high GPA,” McCormick said.

While colleges do factor in GPA and ACT scores for admission, college representative McKee also stressed the importance of extracurricular and sports.  “We have a holistic view so I don’t just look at your transcripts or your GPA, but I look at you as a person and the activities and clubs you’re involved with as well.”

College fairs can often help students get answers to their questions about campus, requirements, and scholarships. “I learned that it is expensive but that there’s a lot of stuff that could help lower the cost,” McCormick said. McCormick’s parents both attended Mizzou and she has maintained a high GPA throughout high school to ensure scholarships.

Leslie Aguilar, AVID teacher and organizer of the event, was pleased with the turnout of the event. “I think the college reps turnout is really strong, especially for a small area and we have promoted to all the schools in mid-Missouri,” Aguilar said. “There were many families and students who attended and our representatives were talking to a lot of students.”

She hopes students from around the area will be in attendance in future years.

While the annual college fair comes to a close, the process of preparing for college doesn’t. “I would say visiting a college that you found interesting and applying to those colleges as well. Also sending as many documents that the college needs to get through the application process.” McKee said.