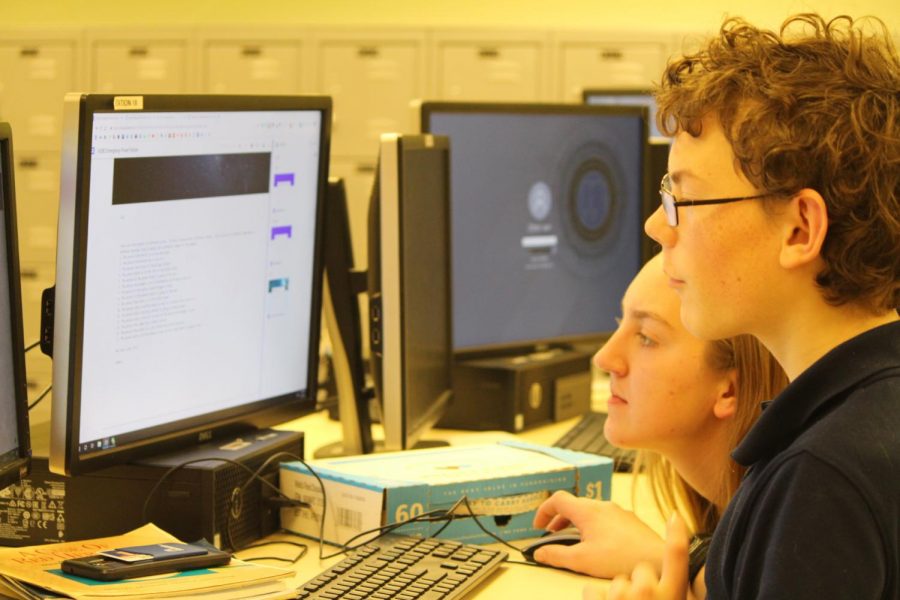 Jonas Ferguson and Cassidy Schulte collaborate on a project.

Extended Educational Experiences (EEE) is a program that runs from elementary school through high school. It’s different at each level. EEE at Battle is different than at the other schools in the district. “At Rock Bridge and Hickman EEE in the high school level is kind of just ACT prep. Here, it’s project based learning,” said Isaiah DeShon, a senior. Students have the opportunity to work on any project they want to in class, and they can work by themselves or collaborate. They’re graded on their goal setting and evaluation, or can choose to take the EEE resources class, similar to a study hall.

Here’s some projects that students in the EEE class are working on:

Isaiah DeShon, senior, has been working on Earth’s Workshop since his sophomore year. “It’s a collaborative outdoor classroom and garden between Battle High School and Battle Elementary School,” said DeShon. It’s focused on expanding STEAM learning, which stands for Science, Technology, Engineering, Arts, and Math learning. “I like to say A for agriculture as well,” he said.

The idea began with the Title-1 preschool here at Battle High School. “Some of those kids have never even played in the dirt because they live in an apartment in the city and they don’t have a yard,” said DeShon.“Their playground here is ground up tires and rubber. They’ve never had the opportunity to play in actual dirt, which for someone with my background who has family who farm, that’s kind of inconceivable. I wanted a way for them to understand where your food comes from and how it grows. Not just the preschoolers but our students, as well as elementary schoolers.”

The garden will be located behind center field of the baseball field, but construction has not begun yet. “We had to start with getting permission from administration and then the grounds managers, but then the budget itself is about $6500,” explained DeShon. “So we had to raise that. Originally we were trying to do a barbecue. I spent about a year restoring my teacher’s old barbecue trailer grill that he donated to the program…We had it scheduled for the weekend, we were going to use one of battle’s concession trailers, but the administrators told us the Friday before that weekend that we were no longer able to use that. We had spent over a year and a half gearing up towards this barbecue and then we couldn’t use it anymore.”

More recently, DeShon has been reaching out and building contacts. “I have been reaching out to Dr. Stiepleman. He was actually a big proponent of outdoor classrooms at other schools so we’re trying to see if he had any resources available. So that’s kind of where we’re at right now.”

DeShon talked about the design of the garden. “It’s going to have raised beds where kids can plant vegetables and stuff, and it’s also going to have different areas directly into the dirt where the kids will be able to grow pumpkins for their fall parties at the elementary school and carve them, as well as possibly watermelons.”

The layout will also include benches for kids to sit and do their learning on, but the garden will be his main focus.

Since DeShon is a senior this year, he has appointed Sam Schupp, a sophomore, to be his successor and carry on the project once he leaves.

Sydney Livingston, junior, runs Battle Volunteer Corps, a club here at Battle. “I started at the beginning of my sophomore year, and I’ve been working on it all through last year and this year.” said Livingston. “My job is, as coordinator and president, is to organize and look for opportunities in the community and in our school that students can volunteer at, whether they need hours for NHS (National Honor Society), or they need hours for A+, or if they’re just looking to volunteer within the community. Battle Volunteer Corps is there to provide opportunities for them.”

Recently, there’s been a new addition to their program. “It basically revolves around kindness,” said Livingston. “The Youth Kindness Ambassadors is a program drawn from the Children’s Growth organization that we are adopting. As our members are more active and as we see them doing random acts of kindness in their community…they will be inducted as a Youth Kindness Ambassador, so that’s an honor that we now offer. We’re starting to do lots of little projects revolving around that. We did a random act of kindness, we cleaned the media center one day after school.”

Battle is celebrating Youth Kindness Week from Feb. 11 to Feb 15. One of the activities Battle Volunteer Corps will be doing is a kindness chain. “Kids can come up during Spartan Time and during Lunch shifts. Whenever they fill out a kindness chain with a word of encouragement or something kind to say, they get to enter into a raffle. We’ll be raffling off Sonic and a couple of other different food places as well as a trip to worlds of fun with Battle Volunteer Corps, which is the trip that we take at the end of the year.”

Running Battle Volunteer Corps has allowed Livingston to gain many skills. “I had to learn how to communicate with superiors and with my peers to try to figure out what the students at our school were interested in volunteering in, so I definitely had to develop my organizational skills and my communication skills. I had a lot of growth to do, I was a sophomore when I started, so I’ve grown a lot and I’ve developed lots of skills by organizing this program.”

“The MSA is a summer camp that’s basically for people who are motivated academically to engage with other people who are also motivated and you get to take classes at the university and stay there for a while it’s also about learning leadership skills and problem solving skills, which is kind of what this class (EEE) is about,”she said. She had to write and submit two short essays for entry.

“I’ve also just finished my Future Problem Solving story for an international competition…that takes a current issue, and projects it into the future with predictions on how it’s going to work out,” said Shively. Participants can choose from a list of four or five topics that are different each year. “Mine is on stress and the effect it has on people our age.”

Shively had also been working on the Out of Darkness walk, a walk to raise awareness for suicide and suicide prevention. “I helped my freshman year with arranging it. This year I was going to help, and then we had weather issues and I suspected that it would get cancelled, and I had other things to do, so I couldn’t do it, but we’re thinking about doing a Glow Walk here at Battle, at night.” The Glow walk would also raise awareness for suicide and suicide prevention.

Cynthia Ricciotti, a sophomore, is involved in a club called Wake Up Interact, a project headed by Trenton Marks, a senior. “Wake up stems from EEE through Trenton. The whole thing is that it wakes people up to things that are happening in our community, social justice, that kind of thing,” said Ricciotti.  “The whole thing is service above self. The focus is community service and things that just generally affect our community.”

“Right now we’re planning for the TedX at battle for next year,so that’s our current thing, and we’re involved with the Rotary here in Columbia and we’re connected with them and that’s why we’re called Wake Up Interact,” said Ricciotti. Rotary is an international humanitarian service organization.

This is Ricciotti’s first year doing Wake Up. She did still take EEE last year, but worked on disc golf at battle.

William Henderson, a junior, works on activities for Louder than a Bomb during EEE. “It’s a slam poetry club, and basically we just write poetry and we compete in competitions,” he said.

Henderson joined the club last year. The club is headed by Mrs. Smith.

Henderson thinks EEE is important for a couple of reasons. “It really gives you time to focus on like something that you want to do. You can really go far with it because it’s dependent on you and your personal interests and your personal motivations so if you’re motivated to do something then you’re going to get it done…It gives a different approach to school that you don’t get in normal classrooms there’s also good scholarship opportunities internship opportunities that you can do. Mr. Leuchtmann has a lot of connections.” Mr. Leuchtmann is the EEE teacher here at Battle, as well as director of the Columbia Aeronautics and Space Association (CASA).

“Mr Leuchtmann, what he says is he doesn’t tell us what to do or how to do whatever we want, because we’re project based learning, he is just the scaffolding to make our dreams happen,” said Deshon. “Overall EEE as a whole has been able to help with project management skills.”

“Now I can comfortably talk to any level of administrator or city personnel as well as being able to set a goal and then follow through on it. SMART (Specific, Measurable, Attainable, Relevant, and Time-bound) goals are a big thing because you can’t really know what you’ve done if it’s not measurable,” Deshon added.

“I think there’s like a preconceived notion that you have to be super smart or you have to like pass this test,” said Ricciotti. “But really at this point if you want to join EEE and you want to be a part of our community, talk to Mr. Leuchtmann, because we would be more than happy to have you in our group.” Students can join EEE at any grade.