Walk in other people’s shoes

Volunteers rally together at the Out of the Darkness walk 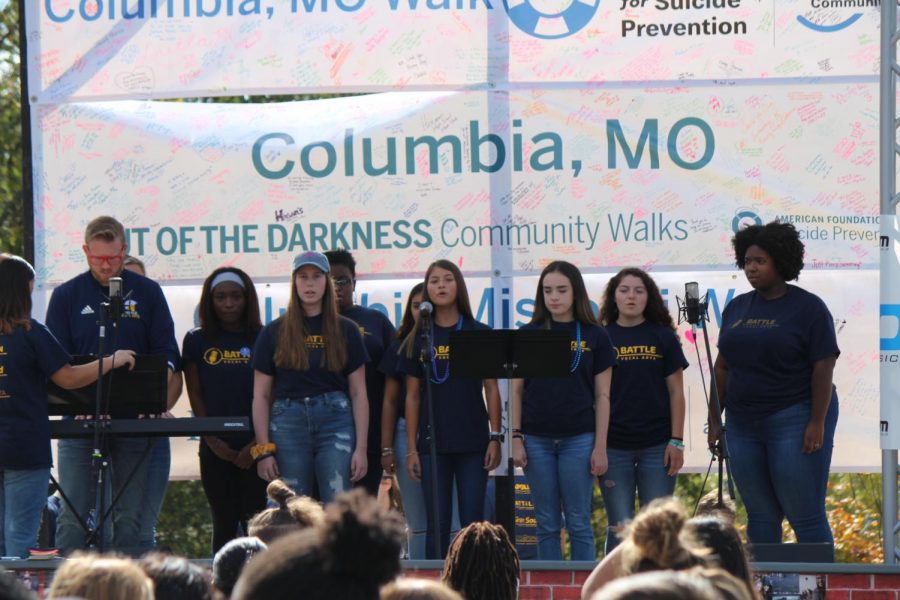 People walk in groups around the calm of the park, talking about the ones they lost, the thoughts they had. They walk to stop the feeling of being alone. To prevent suicide. The annual Out of the Darkness Walk, ran by the American Foundation for Suicide Prevention (AFSP), was held Oct. 20 at Stephens Lake Park.

At the park, 21,500 pairs of shoes greet people on the stage to represent the people who have died from suicide in the U.S. 25 of them are servised issued boots to represent soldiers that died from suicide in the U.S. The walk started with Battle High School’s choir performing on stage. It then moved to people on stage talking about who they lost and how they struggle before beginning the walk.

The walk in Columbia is one of five that the AFSP hosts every year.  The walk was free to the community though people could donate money to teams, also known as color groups. The teams are groups of people who have all lost the same person or want to support that team, such as “Team Cody,” honoring Beth Hendren’s son who she lost from sucide. Hendren also serves as one of the chair members for the walk.

“When I went to the walk I didn’t get the looks, I didn’t get the judgment, and everyone understood where I was coming from,” Hendren said about the first time she went to the Out of Darkness Walk. Hendren helps organize the walks so she can give others the same feeling she had during her first walk: a feeling of not being alone.

The walk hoped to raise $50,000 through donations; however, they ended up raising close to $60,000. The money goes to AFSP, which uses the money for research of the brain to see how suicide and the events that lead to it affects the brain and how to better solve the disease. The money also goes to building programs to give support for people that are suicidal or have lost loved ones to suicide.

“I feel supported and like I can help other people,” said Emily Hammond, a student that attended the walk. Hammond has been coming to the walk for three years because she lost a close family friend to suicide.

Another student, Ajrianna Bean, said she came to support the choir team, but to also support those who are battling with depression and suicide. “My step cousin tried to kill herself,” Bean said.

Mya White, a volunteer with Rotary, emphasized the importance of the event.

“It’s a really important event to have and be a part of,” White said.

Rotary handed out letters made by elementary school kids to people who have lost a loved one to suicide or suffer from depression or anxiety.

The walk is scheduled to happen again next year; however, the date has not been set.