Patrick Mahomes returns from injury against the Tennessee Titans 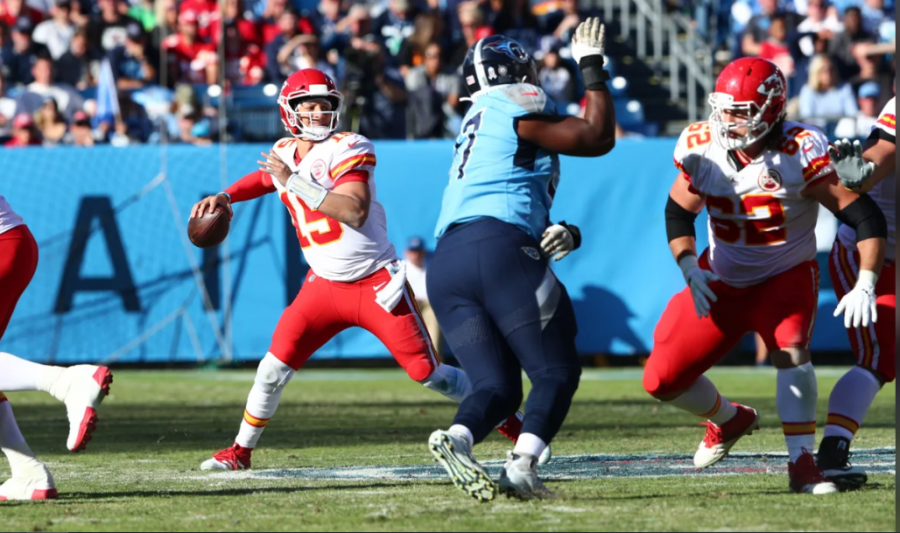 On Oct. 17 the Chiefs played the Denver Broncos. In that game Patrick Mahomes suffered a knee injury that took him out of action for two weeks. The Chiefs did not do bad without Mahomes, but fans were waiting to get their star back. So when the MVP returned to play the Tennessee Titans on Nov. 10, four weeks after he injured himself, fans and teammates were very excited to see him back.

A lot of fans worried about whether Mahomes would still play at the same level he did before he was injured. Mahomes didn’t disappoint. He had a phenomenal day against the Titans. He passed for 461 yards and three touchdowns. He passed for the most yards on Sunday and had the second highest passer rating. This shows that the injury didn’t set Mahomes back. He was still able to throw the ball on the run and stay accurate. This is helpful for the Chiefs because since the loss of key Offensive-Lineman like Eric Fisher, Mitchell Schwartz and Laurent Duvernay-Tardif, Mahomes has to stay in the pocket.
One of the main problems the Chiefs were having was trying to adjust to Matt Moore’s lack of ability to put the ball where it needed to go. He would throw the ball behind the receivers because of his lack of experience. This slowed down the Chiefs receivers and they weren’t able to pick up as many rac yards as they could get.

The Chiefs seemed to bounce back because Mahomes did a much better job of this than Moore. There were many throws that Mahomes was able to hit in stride with Tyrek Hill and Mecole Hardman so they picked up more rac yards then they had the last two weeks. Mahomes also did a great job at targeting all of his receivers. Matt Moore mainly targeted Tyrek Hill and Travis Kelce which is not a bad thing but defenders start putting two people on them and that limits Matt Moore. Mahomes was able to target nine of his receivers which allowed Hill and Kelce to get opened for big plays.The Mahomes magic didn’t work in the end though. The Chiefs were still unsuccessful against the Titans losing 35-32. This is a big problem because the Chiefs are now 6-4 and the Oakland Raiders are close to overtaking the Chiefs in the American Football Conference (AFC) West. The Chiefs need to help Mahomes be more successful by making the defense step up. In the first half, we saw the Chiefs do this extremely well because the defense did a good job limiting the Titans to only thirteen offensive plays, but in the second half the Titans rushing game overtook the Chiefs. Derrick Henry Rush for 188 yards. If the defense can keep their opponents under 25 points the Chiefs won’t have to rely so much on the offense.

Another problem the Chiefs are having is the Offensive-Line. The Chiefs offensive line has been showing weaknesses because of the amount of injuries. They lost Mitchell Schwartz to an injury in the game which means that four of the five offensive linemen were backups. This isn’t good for Mahomes who just came off an injury. If the Chiefs want Mahomes to be their star for the next decade they need to keep him healthy.

The Chiefs hope to keep Mahomes playing at the level he did against the Titans and look to beat the Chargers this Monday, Nov. 18.