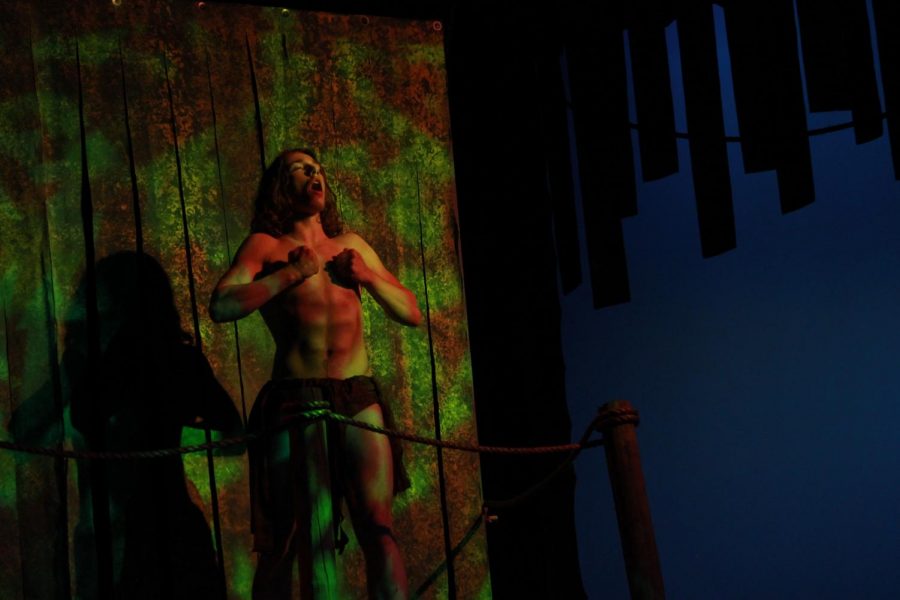 Jaydin Froeschner beats on his chest in this years Tarzan Musical.

On Nov. 8, the music department presented to a packed crowd their musical, Tarzan, inspired by the Disney movie. Tarzan is a story on how a child is left in an African jungle and is raised by the Mangani great apes, only for him to find out his civilization and for him to reject it and to continue living in the jungle.

By the end of the musical, the cast came out to bow to the audience with a standing ovation taking place for their performance. Jaydin Froeschner, junior and Tarzan in the musical, said he was happy with everyone’s performance. “The effort from the cast, the crew, and the pits music was all responsible for this amazing musical we were able to play out,” Froeschner said. “I’m so excited for all of us and can’t wait for next years to get to perform again.”

The cast members, crew, and pit had two months to prepare for the performance as tryouts were held in early September. Froeschner said he did not expect to get the role of Tarzan based off how little acting he had done in the past, but after three days of auditions Froeschner landed the main role of the musical.

Tim Hercules, choir teacher and director of Tarzan, said the tryouts and preparation for the play was easier than last year.

“Our preparation this year felt pretty smooth. We had a smaller cast and people at first were worried overall about forgetting their words, but everyone did a great job,” Hercules said.

Daisy Peterson, sophomore, was in attendance at the musical and said she really enjoyed the production. “I really enjoyed the play and feel it was acted out perfectly. Every cast member did an excellent job and each actor played their roles very well. I also really liked the set that was in place for the play,” Peterson said. “I am very excited for next year’s musical especially after how well thought out this years was.”

Students who are interested in performing in the spring play, She Kills Monsters, auditions will be held Dec. 2 at 4:30 p.m.