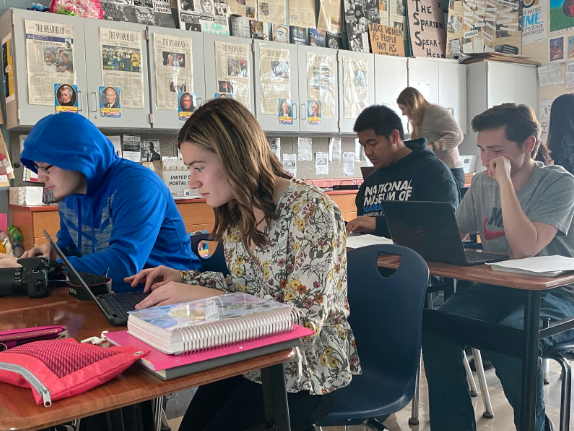 English, math, science, and social studies: These are the four subjects that students are required to take in order to graduate high school. If students are particularly interested in any of these four core subjects, students can take additional classes to learn more about the subject, specifically through elective core classes.

Susie Adams, Advanced Placement (AP) United States (US) History teacher, said that in her opinion, there isn’t much of a difference between a regular core class and an elective one.

“In my opinion, in main core classes like mine, the students elect to take a higher level course to better prepare themselves for their future. There is regular US History for people who don’t want to take AP, but also for the elective core classes, they are just as important as ours,” Adams said.

Juniors and seniors are offered the most elective core class opportunities, while freshman and sophomores focus on the regular core classes.  Some students, however, may have enough credits, allowing them to take additional core classes.

Robert Gastler, teacher, is among the teachers who teach core elective classes. As a college algebra and calculus BC teacher, he sees students who have already completed their three required math credits. While these classes give students more opportunities, like dual and AP credit, Gastler says typically he begins to see a shift in work ethic once students complete their credits. He says that students are still responsible for their grades.

A lot of students tend to lean towards either a regular core class, or elective core class; however, some have an interest in taking one of each.

Adhurim Canhasi, junior, is currently enrolled in AP Squared, the block class of AP United States History (APUSH) and AP English Language. In addition, he also takes  World War II and the 20th Century as an elective core social studies class. Canhasi said that in his opinion, there isn’t a big difference between a regular core class and an elective core class.

“There really isn’t a big difference involving a regular core and an elective one, the only thing that is really different are the range of objectives and topics,” Canhasi said.

Students have the opportunity next school year to take an elective core class alongside their regularly scheduled core class. Talk to your counselor about picking the right classes for your interest.