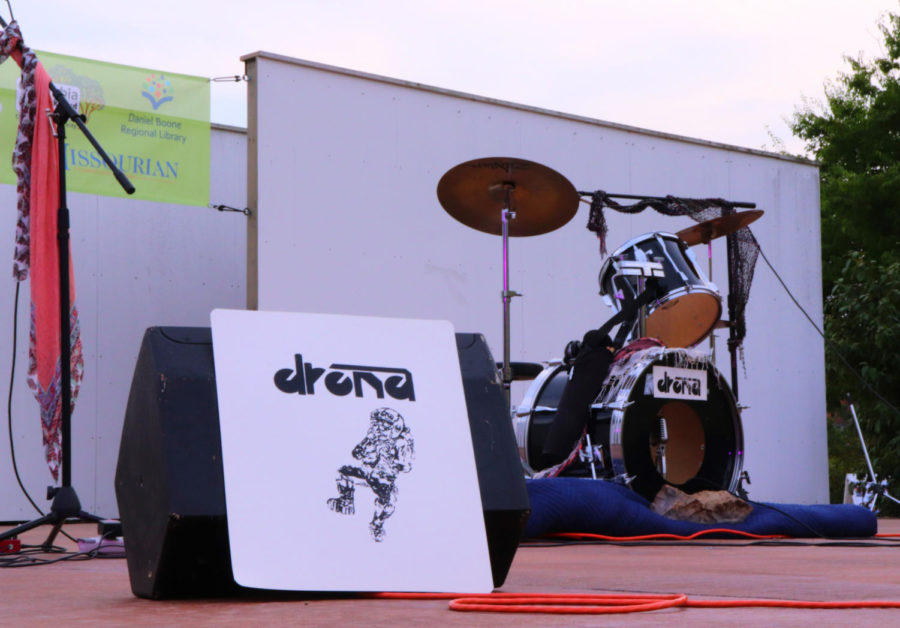 Drona gets ready to open the showcase concert

Where’s that music coming from? From Darkroom Records of course. After skipping a year due to a global pandemic, Darkroom is finally up and running with their first show starring local highschool bands Self Hug, Mudsurf, Effie Lillig, and a small opening band called Drona. The show was on Sept, 2 at Stephens Lake Park Amphitheater at 7pm.

Darkroom Records is a free after school activity where students can visit a professional recording studio and record their own music, be an audio engineer, or simply explore the world of music.

Having a majority of  Columbia, Mo citizens fully vaccinated against COVID-19. It gave Darkroom the opportunity to finally reopen and organize shows to the public once again. Hence this year’s showcase successfully kicked off.

When it comes to selecting bands for the showcase, Darkroom reaches out via direct message to those bands that have already played in past shows or have worked with Darkroom Records before.

“We reached out to a bunch of bands and they were the three that got back to us and ones we knew we could rely on,” faculty sponsor Jordan Smith mentioned.

In a typical year, Darkroom interns and interns that aren’t audio engineers whose roles are to be managers and entrepreneurs, do some outreach and promotions. This year because of the pandemic and the show being at the beginning of the school year, David Aulgur and Smith, who are both sponsors of Darkroom records, put the event together.

The Showcase is a collaboration between radio station BXR and Columbia Parks and Recreations. This is Darkroom’s fourth year working with the two.

“Five years ago we were contacted by Parks and Recs and they said, we have the amphitheater, we’re doing a summer concert series and we want September to be a High School band showcase. Parks and Recs needed a sponsor and that’s when BXR, a local radio station came in,” Smith said.

Singer and Hickman senior Effie Lillig, one of the artists that performed at this year’s showcase, never saw herself playing the guitar until she picked one up.

“I learned to play the guitar when I was like 15 because my dad’s been playing guitar since he was 14, so I’ve been listening to guitar my whole life and I never thought I would have a talent for it because I didn’t think my hands were big enough,” Effie Lillig mentioned.

One of Effie’s biggest influences was her own father who taught her how to play and gifted her her first guitar which originally had been his. During Lillig’s freshman year of high school, Darkroom was hosting an Open Mic night at Café Berlin and Effie desperately tried to get onto the ticket and ended up playing a 15 minute opener which was her very first performance.

After successfully opening the show at the Open Mic night, Lillig was offered the opportunity to record professionally at Darkroom Records.

“After my set I was asked if I might want to record, which was really cool, and so I’ve been doing stuff with Darkroom since my Freshman year and I’m a Senior now. Right now I’m the Darkroom manager for Hickman, trying to get more concert opportunities and planning new concert series,” Lillig said.

Darkroom gives everyone an opportunity to express oneself, if you’re interested in getting involved in the studio, or simply exploring. Contact either Mr. Smith, [email protected], located at G214A or Studio Intern, Jennifer Pereyra [email protected].